Envoi Allen continues on the road to Cheltenham 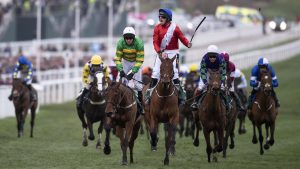 THE exciting Envoi Allen will make his second appearance over fences in the Baroneracing.com Drinmore Novice Chase at Fairyhouse on Sunday. The six-year-old, trained by Gordon Elliott, has two Cheltenham Festival wins under his belt and is already the hot favourite in the horse racing betting for the Marsh Chase at next March’s extravaganza.

Envoi Allen made the switch to chasing in effortless style with a smooth victory at Down Royal and is being tipped to go right to the top over the bigger obstacles.

Chris Richardson, MD of owners Cheveley Park Stud, said. “He’s a pretty special individual and barely put a foot wrong at Down Royal.
“He’s the ultimate professional. We’re fortunate to have him. The Drinmore at Fairyhouse is next and hopefully he can continue in his current vein. He takes everything in his stride, he’s perfectly balanced, he’s a horse who just knows what he’s got to do.
“It’s all a bit nerve-wracking really, you are up on a pedestal waiting to be knocked off, but at the moment we’ll enjoy it.”

Meanwhile, another Irish-trained horse continued his ascent to the top. Minella Indo won in a facile manner at Navan and has been supported for next year’s Cheltenham Gold Cup.

“We may not have seen many Gold Cup clues at Haydock or Ascot this weekend, but with two wins from his two runs so far this season, Minella Indo continues to shorten for the Cheltenham Blue Riband, and now has only dual-winner Al Boum Photo ahead of him in the betting,” said Coral’s David Stevens.

Last year’s Champion Bumper runner-up Appreciate is also heading the ante-post market for Cheltenham. He made a smooth start to his hurdling career at Cork last Sunday, pulling clear to win with the minimum of fuss.
“I’m very happy and he jumped brilliantly the whole way and picked up well from the back of the last,” said jockey Paul Townend.

Bet365 make Appreciate It the 10-1 favourite for the Ballymore Hurdle at the Cheltenham Festival in March.